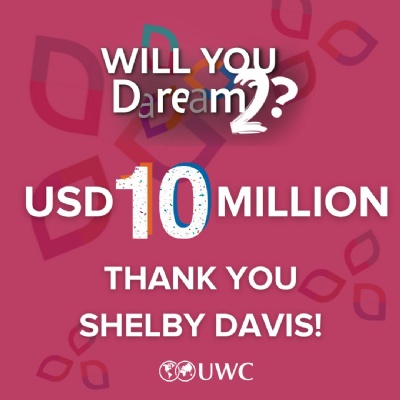 We are delighted to share that United World Colleges (UWC) International Patron and global philanthropist, Shelby Davis, is doubling his support to the Davis-UWC Dare to Dream Scholarship Program for highly talented students in need, who are selected in over 155 countries to attend one of 18 UWC schools around the globe.

“Every UWC student and graduate I have met knows that the force of a UWC education has helped them become global citizens who want to bridge all sorts of differences –  such as between countries, races, religions and outlooks – which can lead toward a better future for all of us. A goal like this takes continuous leadership, time, effort and resources to help a divided world come closer together for the good of humanity. Providing support to the UWC movement is a concrete way to nurture hope as we DARE TO DREAM of a more peaceful and prosperous world. I am doubling my commitment to $10,000,000 and will be doing that every year, and I ask for your support as we work together to achieve our global goals” says Shelby M.C. Davis.

Since the Dare to Dream Program was first launched in 2018, Shelby Davis has donated USD 5 million annually to UWC, providing 100 two-year scholarships worth USD 50,000 to students who, in Shelby Davis’ words, would “not even dare to dream of a world-class education like that offered by UWC.”

Under the new “Dare to Dream 2”-program, Shelby Davis is pledging a further USD 5 million as a match-fund for each scholarship raised by the UWC schools, national committees and UWC International’s newly constituted International Philanthropy Committee. This program is due to launch shortly. To allow UWC schools and colleges and national committees to build up fundraising momentum for future student intakes there will be no initial matching requirement for the additional scholarships provided by Shelby Davis for the 2021 student intake. The matching requirement will kick in from the 2022 student intake onwards and detailed conditions of the program will be distributed in due course.