emPOWERgirls: If you want to achieve something in life, a good education lays the foundation! 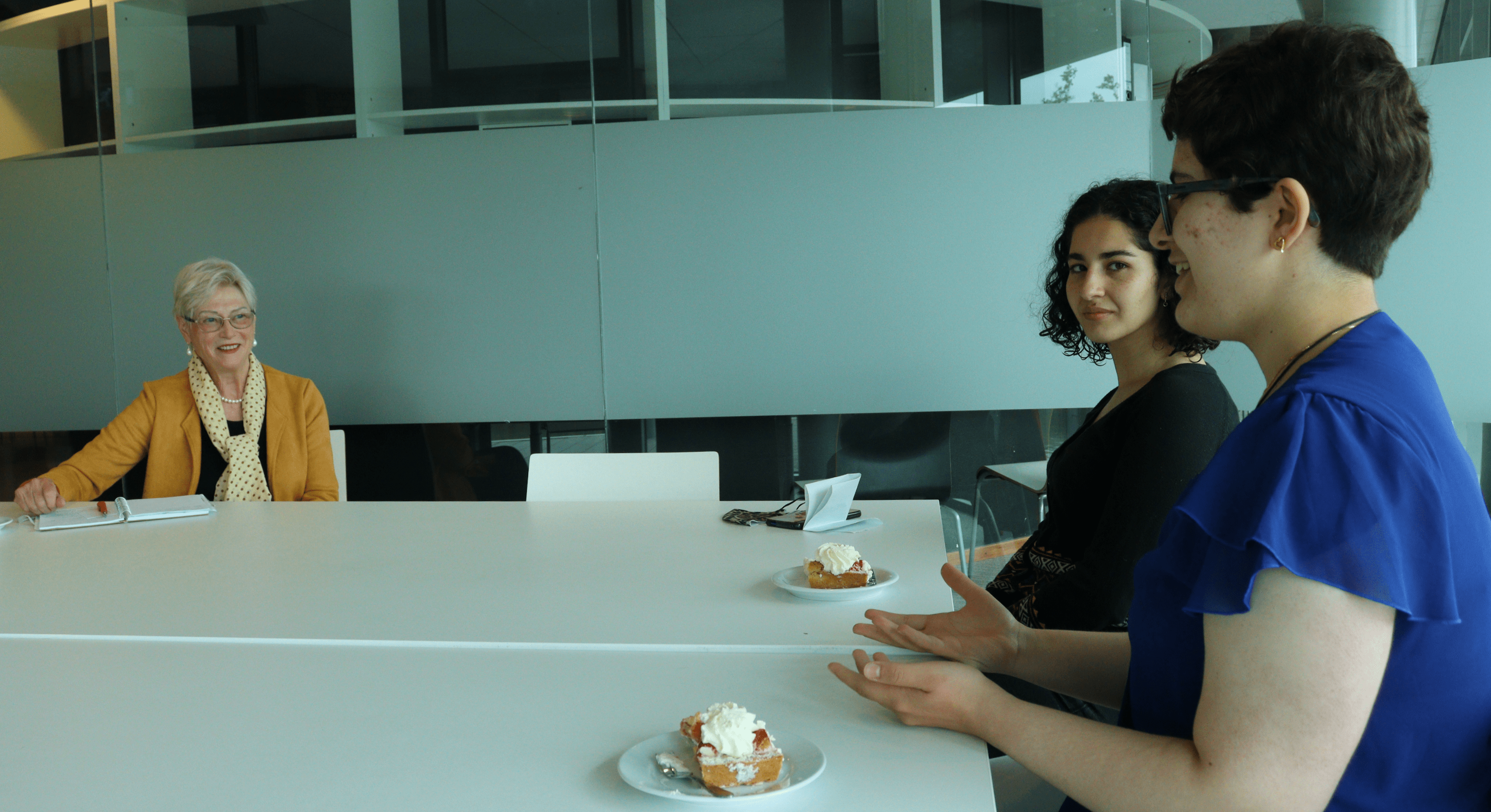 In our ’emPOWERgirls Stories’ we highlight power women in UWC Maastricht’s community. This week you can read about Maria, Leen and Neging. Maria is part of our Female Empowerment Network and she is meeting Leen and Negin, two students from the MENA region at UWC Maastricht.

“If you want to be inclusive, you often have to focus on exclusivity. For example, if you want to ensure everyone has equal opportunities, then you actually need to focus on the group who doesn’t,” says Maria van der Hoeven. Leen and Negin need to think about this for a moment. The two students are meeting with the former politician and executive at UWC Maastricht for a conversation about the power of education, challenges in life and vlaai (the famous local pastry).

To start with the last point right away; a piece of vlaai is unmissable if you have a meeting in the south of the Netherlands. Leen and Negin are already used to this and are more than happy to join in this tradition. The two girls are from the MENA region (Middle East and North Africa) and are in the Netherlands thanks to the UWC Maastricht Female Empowerment Network. The network consists of a group of women from different business sectors who have joined forces and are committed to creating educational opportunities for girls from the MENA region. For many young women there, going to school is not always a given. Even when it is so important! Girls who have gone to school contribute to their country’s economy and prosperity. They also have fewer teenage pregnancies, childbirth-related deaths and are less likely to be sexually exploited. Also not insignificant: educated women pass on their knowledge to their children!

Maria van der Hoeven is one of the women who is committed to this cause and did not have to think for long about joining the network. As a former teacher, she has seen with her own eyes how important education is. “If you want to achieve something in life, a good education lays the foundation. There are still so many countries in the world where gender inequality exists and not everyone has access to a good education. That’s why we need to continue to stress its importance!” As the first female Minister of Education in the Netherlands, she worked hard to do so. “And I still think it’s important to make sure that young people, and certainly girls, have the opportunity to develop their talents. They are the ones who can change our world for the better!”

Negin and Leen are nodding enthusiastically. They totally agree, although they were a little nervous about meeting Maria. “Back home in Iran, there aren’t that many opportunities for girls to get a practical education,” Negin says. “I am interested in science and technology and at UWC Maastricht I can learn a lot about these subjects. I am grateful for this opportunity and am honored that someone like Maria wants to contribute to my future. I had never heard of her before, but after a little googling I found out what an interesting woman she is!”

Leen listens carefully. She wonders aloud what challenges Maria herself has faced in her life. “Well,” she answers, “I have often noticed that it is not always a given to be respected and have my opinion valued, particularly because I’m from the south of the country, didn’t go to a research university and am considered old. But of course, that’s nonsense, and I’ve never let others stand in my way. There’s always someone in your life who believes in you, and you must believe in yourself, too!” That advice doesn’t fall on deaf ears. In any case, there is already one more person who believes in these girls, and that is Maria van der Hoeven!

On our website you can read more about our Female Empowerment Network. Feel free to email us at advancement@uwcmaastricht.nl and we will contact you as soon as possible.