emPOWERgirls Story: Sundus hopes to be an inspiration to many girls in the MENA region 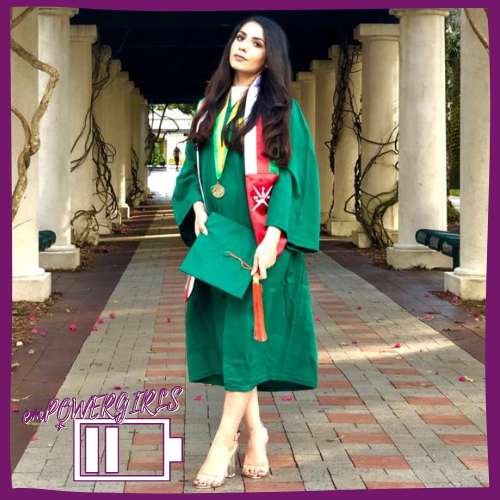 In our ’emPOWERgirls Stories’ we highlight the power women in UWC Maastricht’s community. This week you can read about Sundus Al-Shibani, who comes from Oman and graduated from our school in 2014.

It was a dream come true for Sundus to be accepted to UWC Maastricht. The idea of living and learning with peers from all over the world appealed to her. In Oman she was merely exposed to people with similar perspectives and never really stepped out of her comfort zone. As she likes to challenge herself and acknowledge the room for personal growth, she applied to UWC, got selected and made her way to the Netherlands.

Even though she was so eager to learn about various cultures, values and religions it took Sundus some time to overcome the shock as a result from the diverse student population. It was after a year that she saw so many similarities instead of differences. A mindshift that happened due to UWC creating this “pressure cooker”. Sundus also struggled to find a balance between the rigorous academics and all the social and extracurricular activities that she could endeavour into. But once she had faced this, nothing could stop her.

Based on her academics and the person that she had become, Sundus obtained a grant to study in the US. As one of the few Omani girls, she graduated with honours for her Bachelor’s Degree in Chemical Engineering. She is now very proud to be working for an energy giant that is committed to produce natural gas as part of it’s net-zero emissions objective. The diverse and international environment combined with her employer’s ambition to become more sustainable and create circular energy, fits Sundus like a glove. Her drive towards sustainability, her technical as well as social skills made her an outstanding candidate in the process that was set up especially to hire female engineers.

UWC Maastricht’s Female Empowerment Network, to empower the next generation of girls from countries in the Middle East and North Africa (MENA) by offering them a place at school, forms a perfect match with Sundus’ personal beliefs. With her decision to come to UWC, she inspired her cousin who followed her example to study abroad and broaden her horizon. And Sundus hopes to be an inspiration to many other girls in the region too.

Sundus Al-Shibani (Oman) | Graduated from UWC Maastricht in 2014 and is working as a Petroleum Engineer for Shell Oman..