I am Pumla Maswanganyi, a South African born UWCMaastrichter, from the Class of ‘12 (also known as the ‘Pioneers’).  Coming to Maastricht at 15, I would have never imagined just how transformative this wholejourney would be! From furthering my passion for the arts, to gaining a lifetime family: My life really changed more than I imagined.

Through the UWC experience, I got a greater awareness of myself as a member of the global society, and as an African navigating the space. This led to my interest in exploring African identities and understanding the cyclical relationship between narratives, histories and future development. Through a scholarship to study at St. Olaf College in Minnesota, I was able to create my own major exploring the above (African Identities: Media & Development), while also pursuing Studio Art, Management, and Africa and the Americas.

It was while in Minnesota, where I felt the heightened presence of my UWC community, as there were many fellow alumni from Maastricht and other UWCs, spread throughout Minnesota and the MidWest. Every activity I undertook seemed to have at least one member of the UWC community involved, which speaks volumes to our movement and its values. I began experimenting with entrepreneurial pursuits while in college (along with my fellow UWCM’er, Theresia Kinanti Dewi ’12 ). We were particularly interested in making the coffee industry more equitable for new coffee farmers who were transitioning from tobacco farming. Through this venture, we were selected to be a part of the Clinton Global Initiative University, and with the college’s support, we travelled to Indonesia to further our research.

From that experience, I got to develop upon my inquiry in business, leadership and design; in Denmark, Italy, and of course the Netherlands (because all roads lead back there). It was during this time that another one of my close friends (fellow UDub’er of course) asked me to join forces with her, in building an initiative that would seek to eliminate child marriage in her home country Nigeria, starting in Lagos. This was the first time I was in a position to approach an issue of this scale. While I felt that I didn’t have all the answers, I knew that the quest to navigate this path would be worthwhile. Our first (and most important) supporter was the Resolution Project, which gave us our initial funds and a lifetime fellowship in recognition of our passion to use a non-traditional education approach to ensure that girls could be educated and earn income at the same time – therefore lessening their likelihood of being married at a young age.

As graduation approached, I started thinking about what I wanted to focus on for my next steps, and figured I would Google the phrase: ‘Masters in Globalisation and Development’. Because Heaven has the most interesting sense of humour, the first search result was ‘Maastricht University, MA Globalisation and Development’. Needless to say, you know exactly where my path led back to. Something about being back in Maastown was incredibly surreal but I think the weirdest experiences were feeling like I’d run into people I knew at every corner; and the fact that I lived really close to Nijverheidsweg where school used to be, and biked to class right next to Batterijstraat where we used to live.

Following the Maastricht 2.0 journey, I was caught in the classic ‘recent graduate’ existentialist crisis, about what would come next. Over 30 rejections later: I held on to hope as I would a precious commodity. With the help of my fellowship, and an Email, I landed a role as a junior consultant of a consulting company, focused on supporting leaders, corporations and organisations in increasing their impact in Africa. Less than a year later – having worked with a former Heads of State, consulted on a Summit, and accompanied leaders during the UN General Assembly – I became the Head of Strategy and Operations, and the youngest member of the senior leadership team at 23.

Fast forward to 2020, and I am the Chief Innovations Officer of Baobab Consulting, and the Chief Strategy Officer of Jara – an organisation building a portable solar and crank powered personal educational IoT device for children in post disaster zones and refugee settings. Outside of this work, I support the South African National Committee, as we continue to find and foster the new generation of UWCers. I am also a part of various innovation communities such as UNLEASH, I serve as an advisor to leaders and organisations such as the Roddenberry Foundation, and I speak on various topics from life chances, to innovation in Africa.

If there’s one thing I’d like to convey to you, it’s that our future is malleable! My trajectory and constant exploration of art, African identities, development, innovation, entrepreneurship etc is a testament to that. All in all, my thesis is to not get too comfortable to the point of being narrow with my options, and to just keep looking up as I go along.

That said, no matter where the path leads as my empire grows, I will always have my UWC experience to thank for my journey and lifetime family. 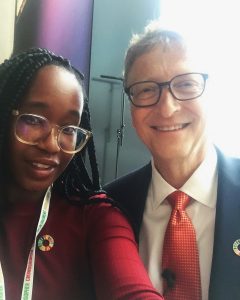 With Bill Gates, at the Goalkeepers Annual Meeting hosted by the Gates Foundation, during the United Nations General Assembly. 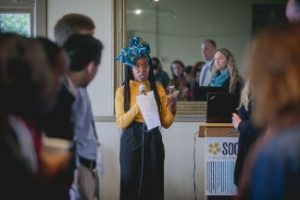 Facilitating a session on entrepreneurship and the UN SDG’s at a summit hosted by a client SOCAP.